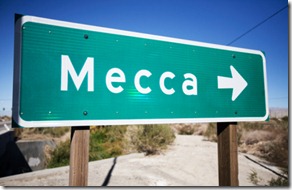 A Gulf state-owned bank has rolled out a new MasterCard that not only complies with Islamic laws banning loans with interest but also includes an embedded compass pointing the way to Mecca.

The new card from Al Hillal bank in United Arab Emirates is the latest in a growing array of banking products aimed at the world’s 1.6 billion Muslims that comply with Shariah, or Islamic law.

“We continue to see a growing demand, especially in the Middle East, for Islamic banking in general, and more specifically in our case, for cards that are Shariah-compliant in accordance with the tenets of the Islamic faith,” MasterCard spokesman James Issokson said.

Shariah forbids “riba” or the charging of interest on loans because it could enable the rich to exploit the poor, encourages risk, and creates social and economic disharmony, according to Abed Awad, an expert on Islamic law who teaches at Rutgers and Pace universities.

Scholars say Muslims can pay interest when there are no other options to get the funds they need. Credit card operators get around the prohibition by charging users fees instead of interest rates.

In addition to the electronic compass that helps users orient themselves toward for prayers five times day, the new MasterCard offers other benefits. Card users are eligible for travel vouchers that can be used to pay for the Haj pilgrimage to Mecca, which Muslims are required to do at least once in their lifetime if they can afford it.

A percentage of the money spent using the card is donated to local charities, said Issokson.

Islamic banking is a huge industry with more than 500 Shariah-compliant funds around the world holding $1.5 trillion in assets, a third of which were launched in the past seven years, according to the Gulf Daily News, a publication based in Bahrain. Some of the products are available in the United States, where there are about 2.5 million Muslims.

Michigan-based University Bank offers Shariah compliant home financing, deposit products and commercial financing through its University Islamic Financial Corp business. Guidance Residential, which is based in Reston, Va., offers residential mortgages in more than a dozen states, according to its website.

Around 80 per cent of the REIT’s annual profit will be distributed to shareholders as a dividend.

The initiative was a move by DIB to help fuel growth in the UAE’s struggling real estate market by allowing investors to take income-producing real estate assets from their balance sheets and receive tradeable shares in the REIT, Chilwan said.

"We are cautiously optimistic but, of course, much depends on the acceptance in the market," he said.

DIB provided the seed financing by moving seven of its own properties throughout the UAE into the REIT, executives said. Properties will be based in the Dubai International Financial Center.

DIB’s chief executive Abdulla Ali Al-Hamli said the REIT will initially look to draw capital from the local market but plans to expand to attracts funds throughout the region and then globally.

Executives said that 51 per cent of investors must be from the Gulf Cooperation Council but all investors would have access to non-freehold real estate invested in the REIT.

In September, Dubai Islamic Bank raised its stake in troubled Islamic lender Tamweel to 57.33 per cent, effectively rendering the mortgage lender a subsidiary of the bank, in a move that was expected to help revive lending in Dubai’s property market.

Islamic business and finance is experiencing strong growth, particularly throughout the emerging market economies of Asia and the GCC, with increasing institutional and infrastructural support. Recognizing the economic advantages and benefits reaped throughout Asia and the GCC, the industry is becoming a vital and competitive alternative to conventional finance systems throughout the world.

To highlight the phenomenal performance and development of the Islamic finance industry, CPI Financial, publisher of Islamic Business & Finance magazine, will be hosting the fifth annual Islamic Business and Finance Awards in Dubai on 21st December. These Awards are recognized around the world as one of the most distinguished Awards Programmes within the financial industry.

"Since their inception, the Islamic Business and Finance Awards have been setting the benchmark for successful Islamic financial institutions and experts from around the world and the region," says Dominic De Sousa, Chairman of CPI Financial.

A total of 30 accolades will be presented at the Islamic Business and Finance Awards.  Shortlists for the various Shari’ah-compliant banks and financial institutions are being compiled by an international panel of judges comprised of leading experts and consultants in the industry. The individual awards presented for ‘Outstanding Contribution to the Industry, ‘Islamic Banker of the Year’ and ‘Lifetime Achievement’, are ‘write-in’ awards that require the voters to nominate the individual most deserving of the accolade.

"At a global level, the significance and rising attraction of Islamic finance is transforming today’s financial world. The industry has proved to be a stable and promising finance sector, growing by 15-20 per cent over the past decade," says Robin Amlôt, Managing Editor of CPI Financial.

Many are seeing that Shari’ah-compliant financial systems encompass a comprehensive screening process, greater transparency and a need to understand the nature of the investment rather than just focusing on returns.  In turn, this ensures built-in checks and balances that create a more stable financial institution.

"Islamic assets are now worth around $1 trillion and with a global Muslim population of nearly two billion people we are seeing a clear shift in preferences towards Islamic finance. Up to 50 per cent of all Muslim  savings are likely to be  held by Islamic banks by 2020," Amlôt adds.

In response to the extraordinary growth rate of Islamic financial institutions, the Islamic Business and Finance Awards continue to draw industry attention and an ever-increasing audience. Being held on 21st December at the Emirates Towers Hotel in Dubai, the Awards ceremony will honour the exceptional performance of various global and regional organisations as well as distinguished individuals within the Islamic finance industry. 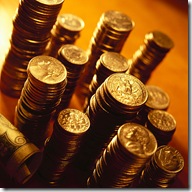 Islamic bonds in the Persian Gulf are returning six times more this quarter than in the previous three months as Dubai-based companies restructure debt and economic growth in the region accelerates.

Sukuk sold by the six-country Gulf Cooperation Council have returned 2.9 percent since June 30, compared with a 0.5 percent gain in the second quarter, according to the HSBC/NASDAQ Dubai GCC US Dollar Sukuk Index. The average yield on the debt narrowed 83 basis points, or 0.83 percentage point, in the past six weeks to 6.65 percent and reached an eight-month low of 6.49 percent on Aug. 3, according to the HSBC/NASDAQ GCC Index.

Bonds in the region that comply with Shariah law may extend gains after the International Monetary Fund said in a report on July 7 that gross domestic product growth in the Middle East will quicken to 4.5 percent this year from 2.4 percent in 2009. State-owned Dubai World said on July 22 it will complete a restructuring of its $23.5 billion of liabilities in “coming months,” while real-estate unit Nakheel PJSC said a group of creditors supported a proposal to alter the terms on $10.5 billion of loans and unpaid bills.

“The Middle East may be coming out of its economic woes, so there is a better chance that its debt will be attractive for the region’s investors,” Muhammad Asad, who oversees the equivalent of $210 million as chief investment officer at Al Meezan Investment Management Ltd., the largest Shariah-compliant fund in Pakistan, said in an interview yesterday in Karachi. “The restructuring and economic recovery are positive signs.”

A rally in the 6.25 percent dollar-denominated sukuk due 2017 issued by DP World Ltd., the world’s fourth-biggest container port operator, pushed the yield down 131 basis points since June 30 to 7.33 percent, according to data compiled by Bloomberg. The yield on the Dubai Department of Finance’s 6.396 percent sukuk due in November 2014 declined 56 basis points to 7.13 percent in the same period, prices from Royal Bank of Scotland Group Plc show.

Transactions in the Islamic financial services industry are based on the exchange of asset flows rather than interest to comply with the religion’s principles. The majority of sukuk are of the Ijarah type, which are based on a sale and lease agreement as in real estate.

Property prices in Dubai, the Persian Gulf’s financial hub, retreated more than 50 percent from their peak in 2008 as the global credit crisis led to a cut in mortgage lending and pushed companies to slow expansion, according to estimates from Colliers International. The GCC countries are Bahrain, Kuwait, Oman, Qatar, Saudi Arabia and the United Arab Emirates.

“The rally in GCC sukuks has been impressive so far but stabilization of the real-estate sector, which is usually a big component of sukuk structures, is needed,” Ahmed Talhaoui, the head of portfolio management at Bahrain-based Royal Capital PJSC, which is 44 percent owned by United Gulf Bank BSC, an investment bank in Bahrain, wrote in an e-mail yesterday.

Global sales of sukuk dropped 28 percent to $7.85 billion so far in 2010, according to data compiled by Bloomberg. Persian Gulf issuers sold $2.5 billion, compared with $3.2 billion a year earlier.

The difference between the average yield for emerging- market sukuk and the London interbank offered rate widened five basis points yesterday to 401, the highest level in more than two weeks, according to HSBC/NASDAQ index. The spread has narrowed 66 basis points this year.

The yield on Malaysia’s $1.25 billion of 3.928 percent Islamic notes due 2015 sold in May dropped two basis points today to 2.84 percent and reached a record-low 2.82 percent on Aug. 11, RBS prices show. The rate has dropped 100 basis points since the notes were issued.

“The return is likely to be higher in the GCC not because of their performance, but because it’s the only way to attract investors to this market,” Naeem Ishaque, senior manager of the international division at Abu Dhabi Islamic Bank, said in an interview yesterday. New issuers will have to offer higher returns, said Ishaque, whose bank had 68.3 billion dirhams ($18.6 billion) of assets in the second quarter.

We are thrilled to announce that www.IslamicAdvisory.com has been nominated "Best Training Institution" by Islamic Business & Finance Awards, the industry’s leading award-granting body. To receive this honor so soon after our launch is as gratifying as it is unexpected. Keep the prayers coming.

HOW YOU CAN HELP MAKE A DIFFERENCE
Mark your calendars and register to vote for us at www.cpifinancial.net after September 25th.

WIN A SEAT AT THE AWARDS CEREMONY ($260 VALUE)
In celebration, we’d like to have an award of our own. Write a 300 word entry explaining why you think www.IslamicAdvisory.com is the "Best Training Institution" and email it to contact@islamicadvisory.com. The winning entry joins us at the gala dinner, a $260 value, on November 25th at the Emirates Towers Hotel, Dubai, and we post the entry in our blog.