Around 80 per cent of the REIT’s annual profit will be distributed to shareholders as a dividend.

The initiative was a move by DIB to help fuel growth in the UAE’s struggling real estate market by allowing investors to take income-producing real estate assets from their balance sheets and receive tradeable shares in the REIT, Chilwan said.

"We are cautiously optimistic but, of course, much depends on the acceptance in the market," he said.

DIB provided the seed financing by moving seven of its own properties throughout the UAE into the REIT, executives said. Properties will be based in the Dubai International Financial Center.

DIB’s chief executive Abdulla Ali Al-Hamli said the REIT will initially look to draw capital from the local market but plans to expand to attracts funds throughout the region and then globally.

Executives said that 51 per cent of investors must be from the Gulf Cooperation Council but all investors would have access to non-freehold real estate invested in the REIT.

In September, Dubai Islamic Bank raised its stake in troubled Islamic lender Tamweel to 57.33 per cent, effectively rendering the mortgage lender a subsidiary of the bank, in a move that was expected to help revive lending in Dubai’s property market.

The fund is the region’s first and India’s largest Shariah-compliant equity fund with an investment strategy that will combine dynamic equity allocation to generate returns.

Leveraging Ambit’s expertise and consistent track record, the fund offers an attractive entry point for investors to leverage the potential for long term price appreciation underpinned by strong growth drivers in the Indian market. QInvest conviction in this project and the Indian market is further demonstrated by seeding capital into the product.

Commenting on this launch, QInvest’s CEO, Shahzad Shahbaz, said: “The Indian equity market provides investors with a highly attractive opportunity to invest in a diversified range of Shariah-compliant equities. The market capitalisation of Shariah-compliant companies within the Nifty, stock market index, is nearly 60 percent”.

“The Fund’s performance in the last three months, since inception, is 10.4 percent” Shahbaz added.

QInvest and Ambit recently organised a professional workshop entitled “Invest in India” at the Four Seasons hotel in Doha, Qatar. Attended by a group of senior bankers and institutional investors, the workshop addressed the current status of the Indian equity market that offers distinct advantages for investors seeking to leverage the fast growing Indian market and an opportunity to diversify their portfolios.

Over 6,000 listed companies boasting in excess of $1.3 trillion market capitalisation has enabled the Indian stock market to be ranked as one of the best performance among emerging markets.  And while China has outperformed on economic growth, India has provided consistent returns to stock market investors in the last 5 years in overall terms.

With many global pension funds increasing their India weightage, a re-rating of the market is probably warranted. “We see the Sensex, Indian stock market index, at 23,000 by March 2011,” added Holland.

“The Indian economy should see robust growth and given that valuations remain attractive, investors are looking to reallocate capital away from more developed equity markets, where their confidence is lower”.

To further strengthen its access to the Indian market, QInvest made an important strategic investment by taking a stake of 25 percent in India’s Investment Bank, Ambit Corporate Finance Pvt Ltd, giving clients access to this high growth market in which many investors have expressed keen interest. 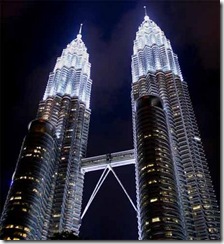 Malaysia is attracting Islamic investment funds from the U.S. seeking higher returns in Asia as growth in developed economies slows.

“Emerging markets is where we see global growth going for the next couple of decades and the source for a lot better opportunities,” Bryce Fegley, chief investment officer at Saturna Sdn., the Malaysian unit of Saturna Capital LLC, the biggest Shariah-compliant stock fund in the U.S., said in an interview on Aug. 10. Saturna’s expertise in Islamic finance “steered us to Kuala Lumpur as opposed to Singapore, Hong Kong or other emerging markets,” he said.

Saturna, the Bellingham, Washington-based company that oversees $2.7 billion of assets, set up Saturna Sdn. in March and obtained an Islamic finance management license in May, Fegley said. Franklin Templeton GSC Asset Management Sdn. got approval to offer services that comply with religious principles in January, according to the Malaysian Securities Commission’s website.

The 14 licenses issued by the Malaysian government allowing international companies to form Islamic fund-management businesses give tax exemptions until 2016. Foreign-ownership rules have also been eased in the global financial hub for services that meet Shariah guidelines.

Growth in developing economies in Asia will quicken to 9.2 percent this year, the International Monetary Fund said on July 7, three times faster than advanced countries. The U.S. economy may expand 3.3 percent after shrinking 2.4 in 2009, according to the Washington-based lender.

Islamic law bars funds from investing in industries such as gambling, alcohol and banking services that don’t adhere to the religion’s ban on interest. Companies with debt exceeding 33 percent of equity or accounts receivable of more than 45 percent of total assets are deemed as non-Shariah compliant, said Fegley.

The Dow Jones Islamic Market World Index of stocks, which has a market capitalization of $12 trillion, has climbed 10 percent in the past 12 months, while the Dow Jones Global Index gained 9.3 percent.

Overseas investors can own as much as 70 percent of Islamic investment banks and sellers of takaful, or insurance that complies with religious tenets, up from 49 percent.

“Malaysia has a comparative advantage because the Islamic finance infrastructure was in place much earlier than other countries,” said Scott Lim, chief executive officer of Kuala Lumpur-based MIDF Amanah Asset Management Bhd., which oversees the equivalent of $670 million including Shariah-compliant equity and debt funds. “Malaysia has a big Muslim population looking for Islamic instruments compared to Hong Kong and Singapore, where there is no such demand,” he said in an interview from Kuala Lumpur on Aug. 13.

Malaysia’s $93 billion of Shariah assets account for 19.6 percent of the country’s total banking industry, according to Bank Negara Malaysia’s website. The nation has 279 billion ringgit ($87 billion) of outstanding Islamic debt, according to data compiled by Bloomberg.

Global sales of sukuk fell 28 percent to $7.9 billion so far this year, according to data compiled by Bloomberg. Asian issuers sold $5.5 billion compared with $8.1 billion in the same period a year earlier.

The government began a 230 billion ringgit, five-year development plan on June 10, which may revive offerings, according to Malaysian rating company RAM Holdings Bhd.

The yield on Malaysia’s 3.928 percent note due June 2015 rose five basis points to 2.84 percent today and reached 2.79 percent on Aug. 13, the lowest level since the securities were sold in May, according to prices from Royal Bank of Scotland Group Plc.

The difference between the average yield for emerging- market sukuk and the London interbank offered rate narrowed three basis points on Aug. 13 to 398, according to the HSBC/NASDAQ Dubai US Dollar Sukuk Index. The spread has narrowed 69 basis points this year.

Saturna Capital started the Amana Developing World Fund in the U.S. in September to invest in global emerging-market Islamic assets. The company bought Malaysia’s Alpha Asset Management in March and changed the name to Saturna Sdn.

Saturna Capital manages Islamic funds including the Amana Income Fund, Amana Growth Fund and the Amana Developing World Fund. Amana Income, which invests in dividend-paying corporations globally, gained 5.6 percent annually over the past decade, compared with the 0.8 percent drop in the Standard & Poor’s 500 Index over the same period, according to the company’s website.

“We’re all seeing that in the developed world there are major structural issues, demographically, with politics and with macro-economic factors that are really causing those economies to stagnate,” Saturna’s Fegley said. “It’s partly a diversification of our business interest” launching into the Malaysian market, he said.

Dow Jones Indexes, a leading global index provider, today announced that it has been named "Most Outstanding Islamic Index Provider" by the Centre for Research and Training (CERT) in collaboration with Messrs. Hisham, Sobri & Kadir (HSK), the Association of Islamic Banking Institutions Malaysia (AIBIM), the Malaysian Takaful Association (MTA) and the International Institute of Islamic Finance (IIIF). The objective of the award is to honor and appreciate Dow Jones Indexes’ efforts and significant contribution in developing the Islamic Finance sector.

The award was issued at the Kuala Lumpur Islamic Finance Forum (KLIFF), which is an annual event hosted by CERT in collaboration with HSK, AIBIM, MTA and the IIIF.

The Dow Jones Islamic Market Indexes were introduced in 1999 as the first indexes intended to measure the global universe of investable equities that pass screens for Shari’ah compliance. With more than 100 indexes, the series is the most comprehensive family of Islamic market measures and includes regional, country, and industry indexes, all of which are subsets of the Dow Jones Islamic Market Index.

An independent Shari’ah Supervisory Board counsels Dow Jones Indexes on matters related to the compliance of index-eligible companies. To determine their eligibility for the Dow Jones Islamic Market Indexes, stocks are screened based on their industry type and their financial ratios. Excluded are companies engaged in the following lines of business: alcohol, tobacco, pork-related products, financial services, defense/weapons and entertainment. Also excluded are companies for which the following financial ratios are 33% or more: debt divided by trailing 24-month average market capitalization; cash plus interest-bearing securities divided by trailing 24-month average market capitalization; and accounts receivables divided by trailing 24-month average market capitalization.

There are currently more than 150 licensees with more than US$7 billion in assets linked to the Dow Jones Islamic Market Indexes.

To respond to the significant market growth in Islamic investments, EFA has tailored the fund to its open fund accounting architecture and transfer agency platform while offering specific training to a dedicated team.

BLME is an independent UK wholesale Shariah compliant bank based in London authorised by the Financial Services Authority. It offers innovative Islamic investment and financing products to businesses and high net-worth individuals in the European, the US, South-East Asian and Middle East and North Africa regions.

EFA is an independent company specialised in administrating investment vehicles. It manages 2,700 funds units worth over €100 billion for more than 215 clients.

Posted in Around the world, Mutual funds and Islamic investments